Writing on the Moon is a video installation inspired by Italo Calvino’s novel Cosmicomics and in particular by its first chapter, The Distance of the Moon.

The video shows words ‘literally’ falling off the surface of the Moon, as suggested by the novel, which takes scientific facts and builds imaginative stories around them. The words, converted into sound tones and transmitted to the Moon as radio waves by a station in Brazil, are reflected by the Lunar surface, received by the Dwingeloo radio telescope in the Netherlands and displayed while they return from the long journey, creating a poetic visual cascade, in a playful act of free associations. The distortion of the letters is caused by the long distance travelled by the radio waves (approximately 768.000 Km) and by the rocky and uneven Moon’s surface, which scatters the radio signals all around the space, as they touch its ground. The words, which can be read vertically, symbolically echo the special Moon condition described in the novel, for which objects absurdely fall from the Lunar surface, onto Earth.

The words displayed in the video are excerpts from the chapter The Distance of the Moon. 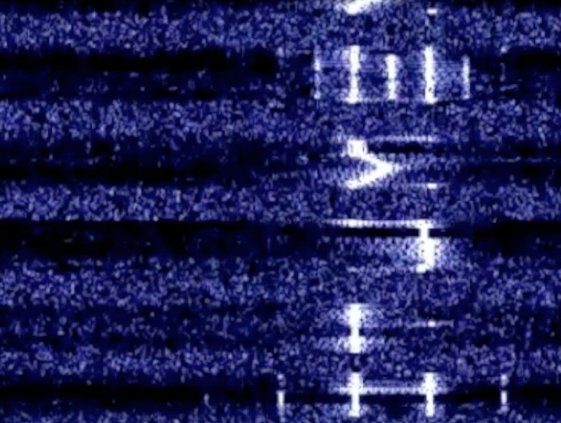